In the kitchen with... 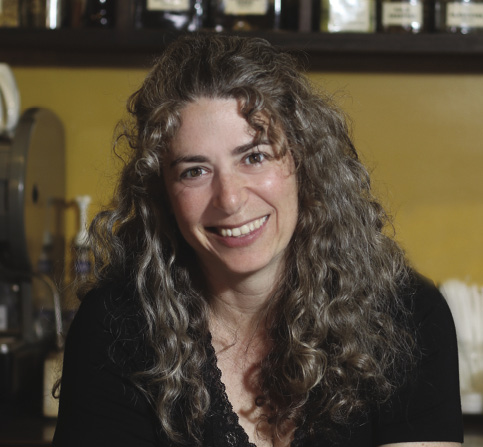 Bringing locally grown food to the table is becoming business as usual in Alaska. Alaskan raised meats, seafood and local produce feature prominently on restaurant menus. And, grocery stores proudly offer Alaskan grown fruits and vegetables in their produce sections. It’s an approach Anita Golton, owner of the Flying Squirrel Bakery & Café in Talkeetna, embraces wholeheartedly. Since she opened the bakery in 2009, she has gone out of her way to source ingredients and products from across the state.

Buying local, she says, plays a huge role in the larger issues of food security and ensuring the survival of small, locally owned farms and businesses. It’s also personal – Anita’s husband owns Birch Creek Ranch, which supplies much of the fruits and vegetables she uses at the bakery. And fresh, local food simply tastes better.
“The quality is so much higher when you’re getting it closer to home,” she says. “I have never tasted sweeter broccoli than the broccoli that comes from our farm. Berries and rhubarb and fresh herbs – there are so many products that we’re able to integrate.”

Anita’s push to incorporate Alaskan grown into her cooking extends beyond the produce she gets from local farms. The bakery serves coffee from K Bay Coffee in Homer, tea from Summit Spice & Tea in Anchorage, and will soon use whole wheat flour from the Alaska Flour Company in Delta Junction.

“It’s really fun to try and integrate these small businesses into the bakery,” she says.

How Anita found herself in this role is anybody’s guess, she says. She remembers the “interesting ethnic food” her mother, an Israeli immigrant, prepared with minimal fuss in their suburban Philadelphia kitchen, and she enjoyed experimenting with a cake decorating set her siblings gave her as a birthday gift one year. But she says she was “academically focused,” and after graduating from Brandeis University got a job as a graphic designer. When life in front of a computer screen became tiring, she began considering her options.

“I wanted to do something similarly creative, something that felt like I was producing something that people could tangibly see and enjoy,” she says. “Somehow, I found my way into baking.”

Despite her relative lack of experience, a café owner in Burlington, Vermont, took a chance and hired Anita as his baker. She spent the next few years “learning while doing” at restaurants, cafés and bakeries in Vermont, Massachusetts and Alaska. What she learned is that for her, inspiration comes from making food that is creative and accessible, with just a dash of fexibility mixed in.

For home cooks, she suggests keeping things simple. Head to a farmer’s market and choose one or two complementary ingredients and focus on bringing out their distinctive flavors, she says. Freeze fresh fruit to use in sauces and scones throughout the winter or turn them into jams and jellies.

“You can use berries and rhubarb year-round from the frozen form and really get excellent results,” she says.

“You can make simple sauces and then eat them on yogurt, ice cream or cheesecake. And that simple combination of toast with jam will never get old.”

While Anita is committed to highlighting local food and creating a deeper connection between people and their food, she also finds joy in the way her food connects people.

“To get a cookie and a mug of coffee while you sit down with a friend, put your phone away and talk to each other, that’s becoming a more and more precious moment for people,” she says. “I really enjoy seeing it happen. That community feel and the importance of the little café where people can sit down and talk to each other, it’s really magical.”